The generic Big Ten action is in full force this morning, which can only mean one thing.  We have once again put another edition of College Gameday in the books.  Be forewarned: I woke up this morning feeling sick, so I will probably not be as funny as I think I am.  Anyways.  This week we were broadcasting live from the USS San Diego to honor our nation’s troops, and celebrate the big matchup between two teams that were not ever really specified upfront.  Today’s big game is probably Alabama taking on Texas A&M, with a handful of other interesting games on the schedule (just not as big of a week as last week).  Our experts are currently sitting at 16 to 3 in favor of the Crimson Tide over the Fighting Farmers.  Make of that what you will.

Apparently this ship, the USS San Diego, has been under construction since 2007 at a cost of right around $1.6 billion.  The crowd wasn’t as big as most other editions of College Gameday, but that is to be expected when they are not at a campus or the site of a big game.  Noticeably present was the Washington State flag; a streak that will never end.  I’m fairly certain that when the first college football game is being played on the moon between Oregon and Maryland (both with new ridiculous looking spacesuit uniforms), College Gameday will be there and so will one astronaut waving a Washington State flag.  Chris Fowler opened up the first hour on ESPNU just like always with Kirk, Desmond and David before handing the ball off to Samantha Steele for hosting duties. 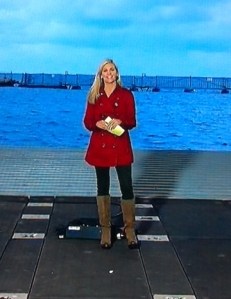 Samantha Steele kept traveling through time back and forth, as she would do a segment in the daylight, then immediately follow it with a segment in the dark, and so on.  The first hour was pretty slow this morning.  We got a replay of the Bill Snyder piece from two weeks ago featuring Baby Bill Snyder.  We got Todd McShay breaking down some USC footage.  The highlight of the first hour was a Tom Rinaldi beatnik poetry piece entitled “Service”.  He pondered the deeper meanings of serving others, and used lots of one word sentences like “Strong… Sound… Pure…Commitment…” while football highlights of the service academies were being shown.  Thank you for another beatnik poetry segment Tom Rinaldi.  Please picture Jennifer and I sitting Indian-style snapping our fingers in applause. 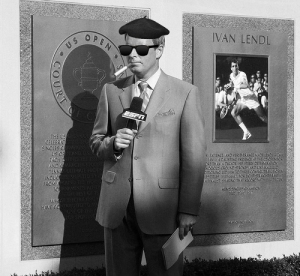 As we closed the first hour, David and Desmond made some picks.  The consensus was Bama over TAMU, KState over TCU, and LSU over Miss St.  David Pollack is still conducting the Beaver Train and picked Oregon St, while Desmond Howard quickly jumped ship and took Stanford.  After these picks, the main show on ESPN started, so Fowler and the gang dispatched David Pollack to go use the internet and tweet at the rubes.  This week David was in a bunk on the ship somewhere tweeting before being disturbed by a Navy officer yelling at him which sent him scampering away in fear. 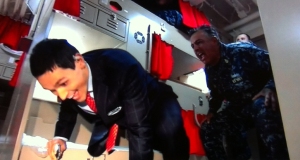 Pollack on the run

We got several segments today touring the ship.  Tom Rinaldi, Sam Steele and Gene W. were all over the place showing off cool parts of the ship, but these segments felt like they were shoe-horned in pretty hard.  Gene W. gave us a piece on Johnny Manziel AKA Johnny Football from Texas A&M.  What we learned about Johnny Football is that Aggies can take old Chuck Norris jokes and substitute Johnny Football’s name into them.  Oh also he’s pretty good at football.  We didn’t get any great signs today because of the smaller/sober crowd onboard the USS San Diego, so this week’s sign of the week will go to the American Flag because I support freedom and liberty.

Without a doubt, the highlight of the episode was the piece from Tom Rinaldi about Clemson wide receiver Daniel Rodriguez.  He was serving time in the US Army and stationed in a pretty bad part of Afghanistan before enrolling at Clemson.  Him and his fellow soldier Kevin Thompson made a pact that after they finished their time in the service they would go back to the States and do something meaningful.  Daniel’s vow was to go to college, get a degree, and play football.  Two weeks later in a massive Taliban ambush, Thompson was killed and Rodriguez was seriously wounded before the Taliban surge was stopped.  He was awarded the Purple Heart and Bronze Star, but after returning to the States he struggled as many soldiers do.  He suffered anxiety, couldn’t sleep, and took to drinking; only finding peace when he visited Arlington cemetery.  One day he woke up and decided to fulfill his vow to Thompson and started training to play football.  He made a recruiting video not even asking for a scholarship  but just the chance to walk on and play football somewhere and give his life purpose again.  Dabo Swinney gave him a shot, and now he is one of the emotional leaders of the Clemson Tigers.  I’m sure I completely butchered this story, as I can’t really do it justice.  This was maybe the best human interest story of the year, so if it pops up on Youtube I suggest checking it out.

But alas, it is time for the picks.  The full slate of picks from all the guys can be found HERE and HERE.  This week didn’t have a celebrity picking games, but it was still a special guest.  This week we had Lt. Curtis Sharp, who is one of the USS San Diego navigators and a former college football player on hand to pick games.  He seemed incredibly nervous, and made it clear he was picking the Stanford Cardinals to beat Oregon State today.  The big game for the headgear pick turned out to be the matchup between Navy and Troy.  I guess I should have seen this coming, but I am not a smart man and this was not heavily teased like most weeks.  Lt. Sharp took Navy, as did Herbie; making it clear that he valued his life too much to pick Troy while surrounded by sailors.  Coach Corso had another FANTASTIC pick, bringing a live goat to the set and picking Navy over Troy for the headgear selection.  I think the possibility of bringing in a live mascot highly influences Corso’s picks, and also makes Herbie highly uncomfortable as he disappeared quickly once the goat showed up.  Enjoy your day, and support our troops. 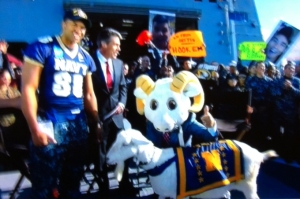