Good evening folks.  Sorry for the delay on this week’s official Unofficial College Gameday review.  We got a last minute invite to go do some gigging with the A&M crowd during today’s big game between Bama and Texas A&M, so we decided to join in the festivities.  Speaking of which, today’s episode of College Gameday was coming at you live from College Station, Tx for this matchup between the Crimson Tide and those Aggies.  This crowd was more lively than last week, and perhaps the most organized fanbase in Gameday history.  Whether you love or hate Texas A&M, they have a group of fans that know yells and chants down to the most minute details, and it made for a good show today.  While we are on the subject of the fans today, let us take a moment to rejoice in a few of the signs spotted today.  “Even Forrest Gump got into Bama” was a strong contender, but this week’s official sign of the week is pictured below.  I salute you sir; this is good work you are doing.

The guys talked a little football, and then this happened, and I don’t really have much to say about it. 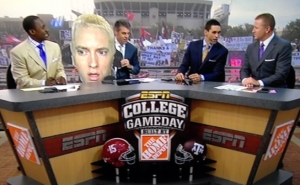 Bald Man on Campus returned with your host Scott Van Pelt, and this week it was an interview with Alabama linebacker CJ Mosley.  There wasn’t really much schtick from SVP this week; it was pretty much a regular interview.  This segment determined that CJ Mosley is pretty good at football.

We saw the return of Beatnik Poetry with Tom Rinaldi, and this week’s piece was dedicated to Bear Bryant.  Since Bryant coached at both A&M and Bama, and this week would have been his 100th birthday, this game was even more special.  Rinaldi brought up food for thought such as what Bryant would think of his teams today.  He said Bryant’s influence is both timeless and present in today’s game, and that this game would be a gift to him on his 100th birthday.  Very deep stuff.

Other things we learned today is that Texas A&M still hates Dennis Franchione, since they hissed and booed every time his name was brought up.  We also learned that *PERHAPS* the visiting locker room at A&M has been *ACCIDENTALLY* out of order this entire season, so Bama brought their own portable AC units just in case they were needed.  We also learned that Paul Finebaum thinks the SEC is pretty great, and he also wants you to get off his lawn.

A big part of today’s show was a roundtable discussion with Fowler, Corso, Herbie, Desmond, Pollack and Paul Finebaum about players getting paid and the scandals coming out in recent weeks about Oklahoma State and Bama.  Maybe it is just me, but I feel like every time one of these stories surfaces, Desmond Howard is suspiciously very vocal about supporting the players and proclaiming them innocent until proven guilty at the same time he advocates players getting compensated for their likenesses.  Of course, Mr. Howard would NEVER pick up a nickel off the street if it fell from a booster’s pocket at Michigan back in the day.  However this devolved into a discussion of civil rights with Desmond Howard apparently fighting for the lower class, and letting us know that this is just another example of the underprivileged being taken advantage of by the wealthy.  I half expected him to dive into a speech such as “I HAVE A DREAM… THAT ONE DAY… COLLEGE PLAYERS CAN BE PAID LARGE SUMS OF CASH… DELIVERED IN BRIEFCASES… BY COLLEGE RECRUITERS… AND SHADY AUTOGRAPH DEALERS… AND SEEDY BOOSTERS…” and so on.  This discussion got very heated between the guys, and Desmond Howard got somewhat hammered on Twitter by a lot of users who accused him of vaguely getting race involved in this discussion.  At the end of the segment, Desmond reminded us that he has no good solution to the problem, but wants you to know it is a problem.  Fair enough.

We got a quick mention of Rutgers retiring Eric Legrand’s number at today’s game.  If for some reason you don’t know Eric Legrand, just Google his name.  His story is inspirational, and it was really cool to see it happen today.

There was a segment from Gene Wojciechowski about the mother of Thad Randall from Nebraska who apparently plays center for the Houston Energy women’s football team.  Thad said he could take on his mom and wouldn’t cut her any slack.  She also apparently had three toes amputated from some accident and continues to play.  She seems tough.

Chris Fowler returned with the Hundred Dollar Bill Question, and this week was actually one the rest of the crew almost got right.  Who was the last QB to beat Saban in back to back starts?  Drew Brees at Purdue.  The guys were all pretty close guessing Big 10 QBs from back in the day, but missed Brees.  Also, Desmond said that this question should only be worth $50 since it was so late in the show.

I felt like today’s show lacked some of the pizzazz of other weeks.  We didn’t get any Tom Rinaldi-Tim Tebow Memorial segments featuring heartbreaking and emotional stories related to football programs.  Bald Man on Campus was pretty straight forward.  We didn’t get to see EVERYONE’S FAVORITE SEGMENT OF THE DAY DAVID POLLACK USING THE INTERNET.  And we only got about 25 seconds of Samantha Ponder today as she introduced a single segment.  I wonder what that is about.  Anyways, here was her outfit today.  Jennifer said the top was great, and liked that her hair was back to being parted on the side.  She didn’t like the skirt’s color or shape, so Mrs. Ponder please take note.

But now its time for the business you all came here for.  Today’s guest celebrity picker was musician Lyle Lovett.  Last year Lee Corso might have been the only one who gave Texas A&M a shot against Bama, and he picked them to win the game.  Corso is off to an 0-2 start picking headgear games this year, and so is Billy the Cat.  Billy the Cat went with Texas A&M (the clear bowl being A&M, the red bowl being Bama).  Corso threw on the Alabama headgear (which meant no live animals this week to Herbie’s relief), and that means after today’s game Lee Corso leads Billy the Cat 1-0 in headgear picks for the year.  Enjoy your evening and see you next week. 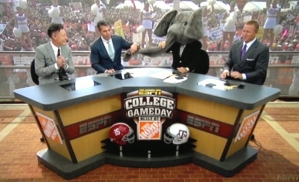