Welcome to the way-too-late Week 4 edition of the College Gameday review.  This week’s edition of College Gameday was broadcasting to your television set live in color from Tuscon, Arizona for the big matchup between Arizona and UCLA.  Whenever Gameday is on the west coast for a Pac-12 game, it is always an early start at the show location, and this brings out the best (or worst) of the fans on most occasions.  Maybe it is because only the crazies would get up that early to go claim a spot for Gameday, or maybe it is because they can basically go straight from the bar to the Gameday site, but comedy is always present for the 6AM local start.

Before the show even started this morning, there was urgent business which almost postponed the entire show.  The Washington State flag, which has appeared at 166 consecutive College Gameday shows dating back to 2003, was lost in transit sometime late Thursday or early Friday.  The show was almost cancelled by producer Lee Fitting as you can see below:

We have seized all activity on the @CollegeGameDay set until Ol' Crimson makes it to Tucson. We will not proceed without. #FreeOlCrimson

Let’s dive right into the sign game this week.  Strong contenders this week included “I LIKE SPORTS” and “I’m still drunk”.  I was surprised at the lack of Lane Kiffin signs after the rumor mill started buzzing this week, but perhaps they were just confiscated before being allowed to enter the Gameday site.  There was a massive amount of signs picking at the alleged minutiae of everyday life for our student athletes and their coaches.  Lots of Jim Mora tributes including “Jim Mora waters his lawn” and “Jim Mora is gluten free”.  However, the target of more signs than anyone else was UCLA QB Josh Rosen.  “Josh Rosen hangs out with his RA”, “Josh Rosen wears socks to bed”, and “Josh Rosen doesn’t even fast on Yom Kippur” were among the many featured.  However this week’s co-signs of the week are a little bit edgier that we usually see on Gameday. 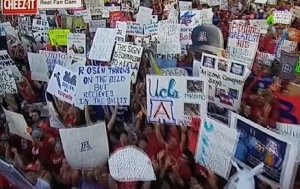 For some unknown reason, there was a point early in the show where the crew was discussing the Rutgers/Kansas game.  I only point this out because none of the Gameday hosts knew who the head coach of Kansas was except Rece Davis.  Poor Clint Bowen.

The Sam Ponder outfit of the week was a hit in our household this week.  Jennifer gave it big props, so let us know what you think.

Tom Rinaldi presented us this week’s touching piece about teams surprising some of their walk-ons with scholarships in different ways.  This was pretty much a recycled segment from last season on the same subject, but I would be perfectly fine if they did one of these segments every year.  Those of you who may have read my reviews before know I love to bag on Tom Rinaldi for sensationalizing certain pieces (see last week’s Lawrence Phillips piece) but seeing walk-ons get scholarships certainly gives me the warm fuzzies.

Speaking of Tom Rinaldi, he and Gene W. did a quick piece on football players and their use of the ice bath.  I point this out because not only did we get both of them shirtless, they went into an ice bath and then Tom Rinaldi disappeared as the crowd around him jumped in.  We may never see him again judging by the full video.

Today we got to revisit the inspiring story of USC deep snapper Jake Olsen.  In case you’re new to the show, he had been featured in Gameday as a 12 year old USC fan who was going to lose his eyes to cancer.  He had appeared as a special guest picker posting a 6-4 record picking with Corso and the boys.  He had appeared as the only blind high school deep snapper I’ve ever heard of.  And today he appeared as the newest addition to the USC roster as a deep snapper.  He hasn’t gotten play time yet, but it is a pretty darn cool story with how much he has accomplished.  He is playing major college football without the sense of sight.  I am laying on a couch eating ice cream while blogging.  It is pretty much the same thing I guess.

Gameday did a feature on LSU running back and Heisman hopeful Leonard Fournette.  You probably remember his most famous moment when he performed a Heisman pose while squeaking out a win against Sam Houston State last year 56-0. 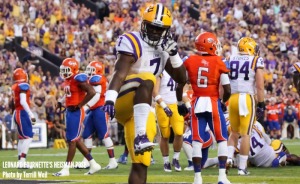 This piece on him from today featured his story of surviving Hurricane Katrina and a tough upbringing in New Orleans.  The most shocking moment was when he casually told us about football practice one day as a youngster in New Orleans.  “That spot over there with the swings, that’s where one of the coaches got shot in the head at.”  All I could think is:

Still a great segment, so check it out here.

As the show started to wind down, it was once again time for everyone’s favorite segment, #YOUHADONEJOB!!!!  Just watch the video because words do not do it justice.

When it came time to get down to the business of picking games, this week’s special guest celebrity initially left me scratching my head.  He is famous(?) Arizona alumnus Bob Baffert.  I didn’t know who that was until Jennifer told me he was the trainer of Triple Crown winner American Pharoah.  He arrived on a private jet, so he must be doing well in life.  He seemed to have little idea of what is going on in football, and mostly picked games based on a friend or relative who went to a school.  To nobody’s surprise he picked Arizona to win today.  David Pollack had gone with Arizona earlier in the show, and Desmond Howard agreed.  When it came time for Coach Corso to make his pick, he cut to a shot of American Pharoah picking the game and taking UCLA.  To my knowledge that is the first time a horse has picked games on Gameday, but I will follow up on that research later.  Animals must stick together because Charley the Cat went with UCLA as well, while Jennifer and Coach Corso both took Arizona in today’s featured game.  This was the first time Corso has ever picked Arizona as his headgear selection, so this is quite a historical day.

Enjoy your night and have a happy football!